Certain Python functions should not be used or should be used only with caution. Python’s documentation typically includes a note about the dangers but does not always fully illustrate why the function is risky. We will discuss a few dangerous categories of Python functions and some alternatives. If you see these used in the wild, it may not be bad but we should pay close attention to their usage. 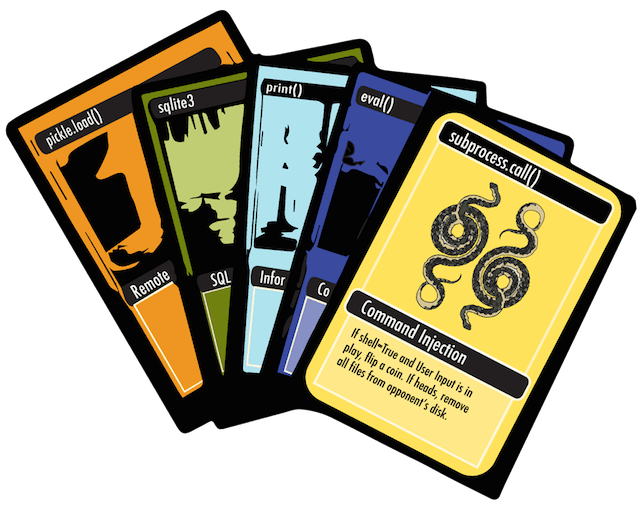 The first group of dangerous Python functions revolve around trusting user-provided input and piping it into a shell.

Sometimes you need to send a command-line application and it’s convenient to do that using Python’s subprocess module using subprocess.call() and setting shell=True.

os.system() and os.popen*() have been deprecated since Python 2.6 in favor of the subprocess module. They have a simple API and they’ve been around for a while so you may run into them in older applications.

Using shell=True (or any of the similar command-line oriented tools in os), can expose you to security risks if someone crafts input to issue different commands than the ones you intended.

Let’s say we want to write a function to transcode a user-specified video file into a different format. We ask the user where to find the file on disk and then run it through ffmpeg to transcode it. What could go wrong?

What if someone provides a file with a name like "; rm -rf /? If the host machine runs the Python process as a privileged user, that could delete all of the files on the machine. That’s bad.

subprocess with shell=False. It protects you against most of the risk associated with piping commands to the shell. If you go this route, shlex.split() makes it easier to prepare the command (and is what the Python docs recommend).

sh - Useful for issuing commands to other applications. I had some trouble issuing complex commands through sh before because of the way it quotes variables. That said, if it works for your use case, then go for it!

The second group of dangerous functions relate to taking input and interpreting it as Python code.

exec() and eval() take strings and turn them into executable code. They can be useful, especially if you are the one who controls the input. As one example, I’ve used eval before to evaluate a large dict-like string into a dictionary.

Again, we do not know what the user will provide in all cases. eval() and exec() will execute we feed them. A user could build a string so that it runs other Python functions to potentially erase all your data, expose your secret keys, dump your database, or perform other malicious actions.

Related to the previous example, suppose you’re evaling a string that looks like this: "os.system('rm -rf /') # dangerous!". It, too, could erase all your files.

It depends. If you’re trying to use eval or exec, there may be a better way to accomplish what you’re trying to do. The functions can be used in many different ways so it is challenging to provide an alternative that covers all use cases.

If you’re using them to perform serialization / deserialization, it would probably be better to use another format, such as JSON, which can be loaded with the json module.

Again, escape your input. You can also disable the built-ins to make it harder to craft malicious input, which Ned Batchelder covers in Eval really is dangerous.

We’ve covered ways in which user input can pose serious risks to Python applications. In the next part of this series, we’ll discuss issues related to deserializing data, loading yaml configurations, information leakage, and more.

Thanks to Zach Schipono and Carissa Sandoval for reviewing drafts of this.